Private investigators, steampunk elements, unpaid debts and science fictional marvels. If any of those words sparked your interest, then you’re going to love today’s guest.

Today on Why Words Work, I am joined by the wonderful Rod Duncan!

Author of The Fall of the Gas-Lit Empire – a three book series following the adventures of private investigator Elizabeth Barnabus – Rod Duncan is a fantastic sci-fi writer. Nominated for the Phillip K Dick Award for his novel The Bullet Catcher’s Daughter (which I reviewed earlier this year and LOVED), Rod Duncan is an accomplished novelist of speculative and crime fiction, a creative writing mentor, and someone I am very excited to speak to.

So, what are we waiting for? Let’s get to it!

How would you define the word Steampunk?

The term ‘steam punks’ famously came in a letter from novelist K. W. Jeter to Locus magazine in 1987. He suggested it as a term to cover ‘Victorian fantasies’ based on ‘the appropriate technology of that era’. But anyone who has gone to the Weekend at the Asylum steampunk festival in Lincoln will know that the reality of steampunk has expanded far beyond that initial concept. It is fashion, gaming, LARPing, tea duelling, model making and more. It is community, creativity and splendid anachronism.

I don’t think genres are well served by the many attempts to define them. I see genres as centres of gravity, which cast their influence far out into inter-genre space and beyond.

With that said, what drew you to writing in the Steampunk genre specifically?

Some people have said my novels are steampunk. Others have disagreed. They have been called fantasy, steampunk and alternate history. And The Bullet Catcher’s Daughter was shortlisted for the Philip K. Dick award, which is supposed to go to a science fiction novel.

So I’d prefer to answer the question ‘Why is my writing influenced by steampunk?’

I’m attracted by the aesthetic, I suppose. Perhaps that comes from a childhood of H G Wells, Arthur Conan Doyle and, well, the anacronator in chief, Dr Who. It also gives me a chance to play speculative games with history. What would have happened if the Luddites had won? 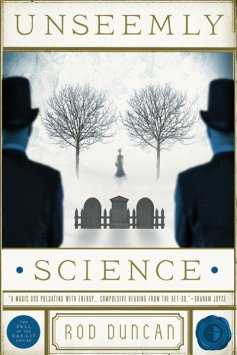 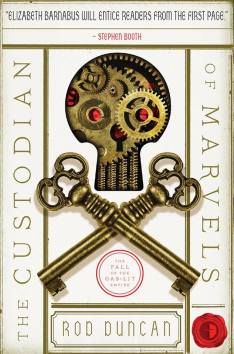 Elizabeth Barnabus is probably one of the best characters I’ve come across this year – what inspired you to create such a badass lady?

You have to imagine me sitting there writing a story about a young man who is a private investigator. He gets into a narrow scrape and escapes by whipping off his disguise and revelling himself as… (At this point something emerges onto the page that I hadn’t anticipated) …a young woman called Elizabeth. Where did she come from, I wonder? She starts telling me her life story. I write it down. The rest, as they say, is alternate history.

The truth is, I didn’t choose to write Elizabeth. I happened to meet her. We got on well. Perhaps she chose me.

The world of the Gas-Lit empire is a combination of speculative history and sci-fi madness. Did you need to do a lot of research to help create the world of your novels? If so, what did that entail?

I have often been asked about research. But the reason I write fiction is because they let you make stuff up. That’s the way it feels to me as I write it.

There is, however, an element of smoke and mirrors about the craft. I once read out a chapter to my writing circle and someone asked how I’d done all the research. I asked what research they meant. “All the technical words,” they said. It turned out there were three technical words in a 2000 word chapter. But I’d positioned them to catch the light, so to speak. The effect was the illusion of a completely researched and fleshed out world.

Perhaps I shouldn’t be telling you this.

As Elizabeth would tell you, leading a double life isn’t easy: How do you balance out your novel writing with your day-to-day life? Do you have a writing schedule?

I schedule, yes. I try to focus on the process rather than the word count. I’ll set a timer for an hour and I’ll try to write until the alarm rings. An hour gives me 500 to 750 words. I can’t keep concentrating at that pitch for a long time.

For the most part, the novel ticks away at about 1000 words a day. But when I get sight of the end – probably about 20,000 words before I reach it – I rush to get the last bit down on the page. The speed climbs and the quality falls. 3,000 words a day at that stage is not unusual. I once wrote 5,000 in a day. There is a lot of editing to do after that.

Some people might argue that Steampunk – as a book genre – is dying, or otherwise very niche. What are your thoughts on this?

I think the genre has bifurcated. There are explicitly steampunk novels which sell to a limited but wildly enthusiastic audience. And there are novels or movies in which you might see a steampunk influence but which are targeted at other genre areas. Mine really falls into that latter category.

Now, time for the hard question: Which two authors have inspired you the most and why?

Two important authors for me are Mervyn Peake and Martin Cruz Smith. A fantasy writer and a crime writer. In Peake’s Gormenghast novels we see an extraordinary piece of fantastical worldbuilding, which really ends up as an examination of cultural stultification and revolution. It is an immense achievement. A work of great brilliance.

Martin Cruz Smith drops his detective protagonist Arkady Renko into a historic real world setting in Gorky Park, following him through the collapse of the Soviet Union in three books that follow. The thing that sets these novels apart for me is his use of the third person subjective viewpoint. I don’t want this to end up as a technical essay on narrative stance. It’s enough to say that I have learned a lot from reading and re-reading his books.

In each case the authors use the small stories of individuals to examine big questions about how societies change. Or how they don’t change. And in each case the prose is so good you want to eat it.

Have you got any new projects in the pipeline that you can share?

I’m starting a new trilogy called The Map of Unknown Things. The first book comes out in January. It will be called The Queen of all Crows. It is set in the same alternate history as my last three novels. But the focus has moved and there are signs that the end of the age is coming. We’ll be doing the cover reveal very soon. You can find out about it here: The Queen of All Crows!

I’m also setting up a writer development agency called The Writers’ Shed. We’ll be running four masterclasses in the next 12 months, as well as offering mentoring, critiquing and online resources. You can find out more about it here: The Writer’s Shed!

And finally, to all the aspiring authors out there, what’s the one piece of advice you’d like to give?

If you don’t have the compulsion to write and tell stories, choose some easier path. But if you do have the compulsion, acknowledge it. It’s going to be part of your life for many years. That sort of thing seldom goes away. Whether it becomes your day job or not isn’t the point. You are a writer. A fellow traveller on the road.

Find me on Netgalley!